Travelling to central Australia was always on my list. I imagined desert, red dirt and an endless expanse of nothing.

I was in for a surprise. 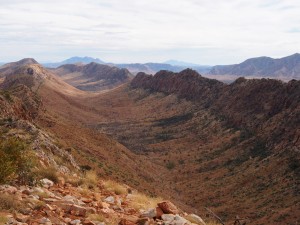 Sitting in a camp chair in the late afternoon sun, I gazed at the imposing form of Mt. Sonder, reflecting on the past week and the journey we were on.

There were thirteen of us hiking a 70 plus kilometre section of the Larapinta Trail, a 223-kilometre route in Central Australia, considered one of the worlds Great Walks. The trail is in the heart of central Australia, in the West MacDonnell ranges, and is often considered a difficult challenge due to the unrelenting rocky surfaces, dry creek beds, steep ascents and descents, and undulating countryside. Beginning in Alice Springs, it winds through gaps and gorges, providing stunning views that made me feel like I was standing in front of a painting.

The group’s pace was variable, determined by the volume of rock on the trail (and the amount of stops needed to take in the scenery). Sometimes we’d cover 18 kilometres, stumbling into camp with feet dragging. But we’d be refreshed by the surroundings: sleeping below a sky littered with stars and on land showcasing nothing but wide-open space.

The land wasn’t just “wide-open” in terms of its vastness. Its openness also allowed us to “just be.” The outdoors can do that — its lack of distraction keeps the doors open so we can uncover meaning and discover more of ourselves.

That morning, we had a mission of getting to the top of Mt. Sonder for sunrise. Waking at 1:30 a.m., we were on the trail by three, our climb lit only by head torches and moonlight.

At 1,379 metres, Sonder is the fourth-highest peak in Australia’s Northern Territory. It’s a steep, rough, and narrow track; in the dark, all of this is exacerbated. However, when daylight broke, we saw the sheer beauty around us and the enormity of what we had achieved.

We felt on top of the world, both mentally and physically.

It wasn’t the physical challenge that changed us, though. We changed ourselves. We had faced so much, from mountains to navigating our path by moonlight, and learned that there is no mountain (physically or metaphorically) that cannot be tackled. We forged friendships, fueled our love of adventure, and discovered our physical skills.

We became strong in spirit, facing fears and having faith in the next step, even if it was outside of our comfort zone. It was not about being too old or too young to give something a go; it was about stepping up, holding on and moving forward.

And it was about laughter — loud and from deep in the belly — and we did it often. How good it was! At home, we may juggle family, kids, aging parents, routine, jobs, relationships and money. There’s a constant competition for time, and we are always “on” for everyone. We are bombarded by media and messages — there is often little time to contemplate and let your mind wander.

But then, there’s the trail.

Out there, we didn’t have to worry about the kids, a sickly father, or some fiasco at work. But being physically challenged and realising what you’re capable of gives you courage, strength, and motivation to take on the mental and emotional challenges at home.

As I sat there in my camp chair, the week came together in my mind. Yes, we were individuals. But we learned each other’s strengths and weaknesses, then came together as a unit to achieve a common goal — hiking those 70 plus kilometres on the Larapinta Trail.

On Your First Adventure 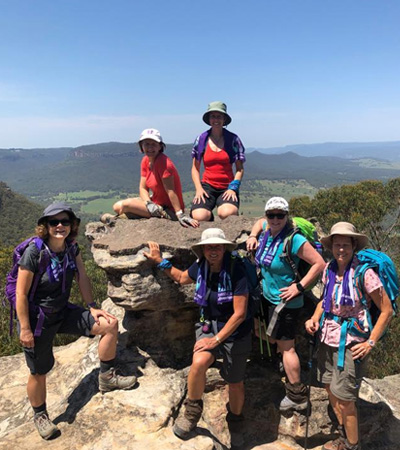